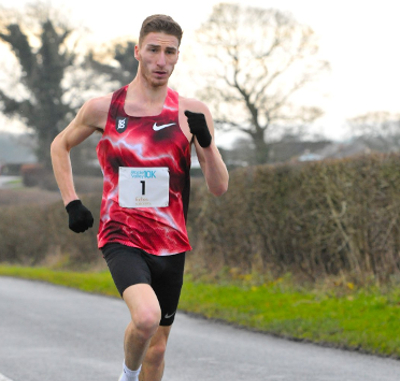 Time was of the essence for Marc Scott at Sunday’s (29 December) Ribble Valley 10K where the course record was up for grabs in a highly competitive race.

Ribble Valley 10K is one of the leading events at this distance in the UK and a magnet for elite runners looking to post a fast time or a PB. Organised by Blackburn Harriers & AC and sponsored by Forbes Solicitors it once again, incorporated the North of England 10K Championships and held on a traffic-free course through picturesque Lancashire countryside.

A generous prize list worth over £1600 was an incentive to go hard and fast from the start. Promising a fierce contest for the top three places in the men’s and women’s race as well as the male and female course record and the £500 bonus prize.

Marc Scott of Cambridge & Coleridge AC returned to defend his title and did so in style, winning the men's race in 28:32 – knocking 26 seconds off the existing course record. Ben Dijkstra of Leicester Coritanian AC was runner up in 28:53 – only a second in front of Charlie Grice of Brighton Phoenix, third in 28:54.

Jess Judd did her club proud by winning the women’s race in 32:17 followed by Rachel Franklin of Manx Harriers in 33:24. Holly Archer of Cambridge & Coleridge AC was third in 33:27.

This race attracted runners of all standard who put their best foot forward around this fast course. They received a technical T-shirt for their efforts.

Register your interest for the 2020 race at the Ribble Valley website.