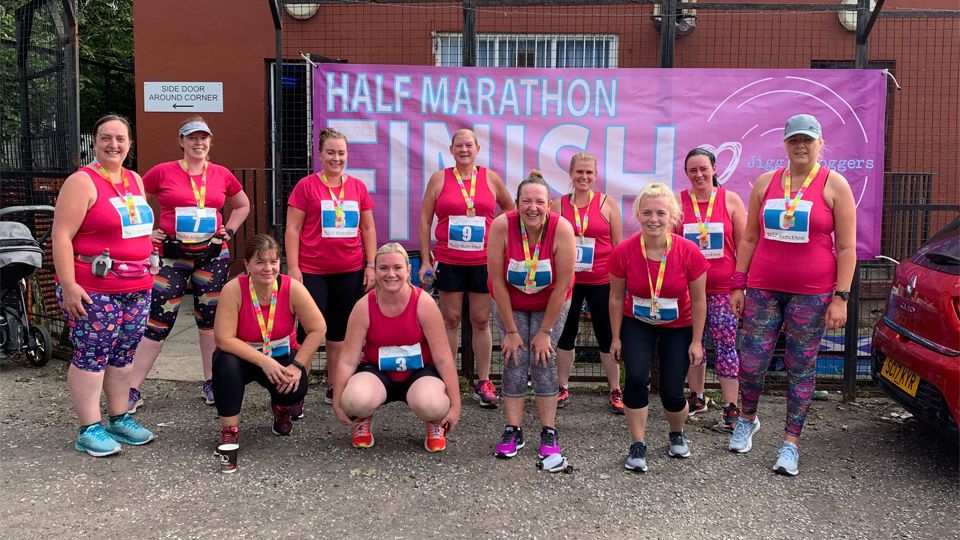 At the start of 2020 Jiggly Joggers were on a high. They had been recent finalists at the jogscotland awards and Elaine Leitch had won the Lord Provost's Special Recognition award for her inspirational work with the East End group.

The upward curve for the group, founded in early 2018, continued when the Jigglys added 60 new members via their January Couch to 5K programme. They had also created a half marathon training plan with Liverpool's Rock n Roll Half Marathon the target for an ambitious 12-strong squad. They were flying high – what could possibly go wrong?

Fast forward two months and Jiggly Joggers, like the rest of the country, were facing lockdown with its restrictions on social interaction and limited opportunities for exercise. These were dark times.

Elaine Leitch told runABC Scotland: "As lockdown took hold it became apparent how important this group had become to members, not only as a place to improve fitness but as a support network for coping with life. Many of our girls faced social isolation through living on their own. Plus there was a range of vulnerabilities so it was important to keep in touch with everyone."

Social media and home-based technology were the Jiggly's tools in combatting isolation and sustaining morale with a closed Facebook group, What's App messaging and Friday night fun sessions with bingo and quizzes on Zoom.

Soon Jiggly Jogger spirit saw them supporting their local community with a local food bank collection and the delivery of provisions to three local care homes who had cases of Covid-19. And then the Jigglys were back on the road.

Elaine Leitch reports: "26 April, the scheduled date for London Marathon, saw two teams of Jiggly Joggers run the marathon distance as a relay from house to house getting a socially-distance selfie at each changeover. One member is climbing Kilimanjaro next year for CHAS but with her planned races cancelled and her fund-raising efforts stalled, she was in trouble. Our London Marathon run raised £640 to support her.

"After the success of the 'London' relay we decided to compensate for the lost Liverpool trip with a May Glasgow East event – 54 Jigglys, 9 teams running 13.1 miles and a big logistical exercise. This time we raised money for local charity Gladigators who were providing hot lunches for kids in Easterhouse and Barlanark. Our £1500 total was matched by Ladbrokes so £3,000 for the kids."

Meanwhile the group had started a 10K programme and restarted half marathon training, each girl doing solo runs until the welcome news that you could meet another household and run in pairs. Progressing to groups of three and then five, pushed the momentum forward.

That momentum meant that at the end of August, 11 girls completed the Jiggly Half with staggered starts for Covid security. The Jigglys used this event to raise £1020 for Scene-It, a local musical theatre school who were facing financial troubles, specifically to cover fees for families whose income had been affected by Covid.

August also saw a new Couch to 5K programme when rules on group numbers eased - 50 new recruits including some existing runners who had seen the Jigglys on the road in their bright pink vests. September and renewed restrictions saw the group revert to solo and buddy runs to support the First Minister's call for reduced contact.

However news of significant Lottery Funding to support jog leader training, hi-viz clothing and member fees means the Jiggly Joggers will be back in full action soon with a real spring in their step.

In just 2 and half years Elaine Leitch and the original group members have seen numbers swell to 130+, the vast majority with no jogging or running background who previously felt excluded from this kind of exercise. Elaine Leitch believes that there is a huge reservoir of demand in the East End of Glasgow for the services Jiggly Joggers are providing.

She summed up the group approach: "Jigglys is a place where woman feel they can belong, where good physical health brings with it stronger mental health. And where the knock on effect of the mother being strong will transfer to the younger generation."

Find out how you can be part of the Jiggly Jogger's experience at the group website.