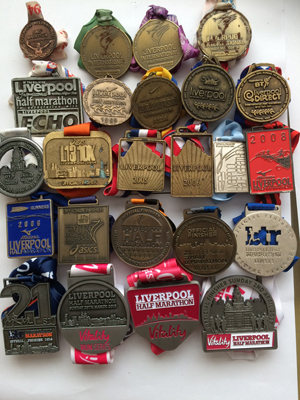 Yes, 2018 will be a very special year for Liverpool Half Marathon as it will be the 25th staging of the event which dates back to 1994. The event has come a long way during that time and has been held on a variety of courses over the years.

The event was introduced back in 1994 after the demise of the Mersey Marathon which took place between 1982 and 1992. The city was without a major race event for a couple of years until the Liverpool International Half Marathon (its original title) was introduced to the streets of Liverpool.

Since those early years the event has gone from strength to strength to become the city's premier road race event with around 6,000 people of all abilities taking part every year.

With a start and finish on the Liverpool waterfront in the shadow of the famous Liver Buildings, the Liverpool Half Marathon is a great race to include as part of your London Marathon training plan - if you have been lucky enough to be accepted that is!

Over the years medals have played a big part and this year there will be a special commemorative medal produced to celebrate 25 years - and for anyone looking for a PB there is a a special PB medal available for anyone achieving a PB for the distance on race day. See event web site for details.

Make a note in your diary - 25 March 2018. What other date could we have for the 25th Liverpool Half Marathon!

To enter the 2018 Liverpool Half Marathon go to the btr Liverpool website.