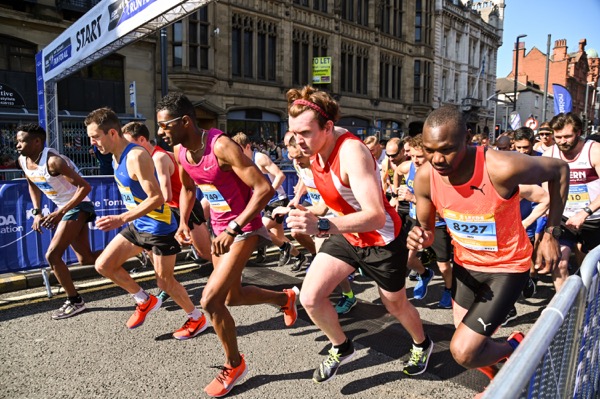 Leeds Half remains at forefront of Yorkshire racing

Close to 6000 runners made their way to The Headrow, bathed in sunshine, for Sunday’s (12 May) Asda Foundation Leeds Half Marathon.

In what was the 34th staging of the event, the 2019 race illustrated why the race is so popular with a superb atmosphere from start to finish and a field that had just the right blend of fun runners, fundraisers and club runners. The West Yorkshire race is one of the jewels in the Run For All crown, raising hundreds of thousands of pounds for good causes.

Sunday’s field moved along The Headrow, out of the city centre, took in a section of the Ring Road and returned via Abbey Road and Kirkstall Road to the big finish in Cookridge Street alongside Millennium Square.

There was a repeat of the 2018 race as defending champions, Mohammed Abu-Rezeq and Faye Banks, fought off the competition to claim repeat victories. Pontefract AC’s Banks sliced over 30 seconds off her winning time of last year to cross the line in 1:21:29, followed by Jenni Muston (1:25:05) and Aisling Wall (1:25:56).

There was also plenty of friendly rivalry in the Leeds Half Marathon Team Challenge in which teams battled to be crowned fastest team in the race, with organisers set to announce the results soon. The half marathon is just one of the highlights in Run For All’s Asda Foundation Series, which features three other half marathons, ten 10Ks and culminates with the flagship Yorkshire Marathon on Sunday 20 October.

Mandy Hepworth, Asda Foundation Co-ordinator, said: “It was fantastic to see so many people taking on the challenge of the Asda Foundation Leeds Half Marathon to raise money for so many good causes. The large crowds gave the runners outstanding support and helped create a tremendous atmosphere. Many congratulations to all those who crossed the finish line.”