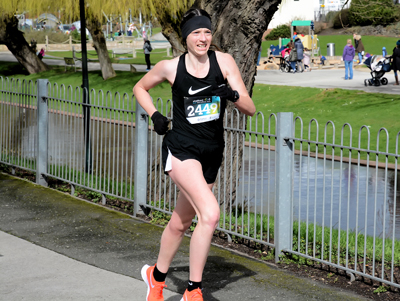 Kelly Butler is top of the class at Stafford Half

It was a gold star performance by teacher Kelly Butler at Stafford Half Marathon yesterday (Sunday 17 March). She gritted her teeth to win ahead of a quality field at this popular race.

The head of Geography at Stafford Grammar School, Kelly Butler was part of a 21-strong group of staff and pupils running in this event. She crossed the finish line in 1:24:31 and hit her three targets: a sub-95, sub-90 and a new PB, ending the day on a high note.

William Draper was the men's race winner in 1:11:43 in what was his first race at this distance. Oliver Harradence of Royal Sutton Coldfield AC was runner-up for the second consecutive year, finishing in 1:11:52 followed by Craig Pilsbury in 1:13:01.

Amongst the 2,800 runners was vegan endurance athlete Steve O’Connor who was wearing army kit and boots and carrying a 35 pound Bergen. The Wirral-based PT is fundraising for Tower Hill Stables Animal Sanctuary, his chosen charity for 2019 and finished in 2:44:43.

Sunshine at the start was replaced by hail and sleet later on, making it hard going for those out on the course. The race route included a climb up Radford Bank and continued through Weeping Cross and Baswich then along Beaconside before heading down the Isabel Trail and onto the finish in the town centre. There was a last minute change as rising water levels in the River Sow meant the race had to be re-routed from the path to the road.

None of this dampened the spirits of those taking part or the enthusiasm of the crowds at a successful Stafford Half Marathon.