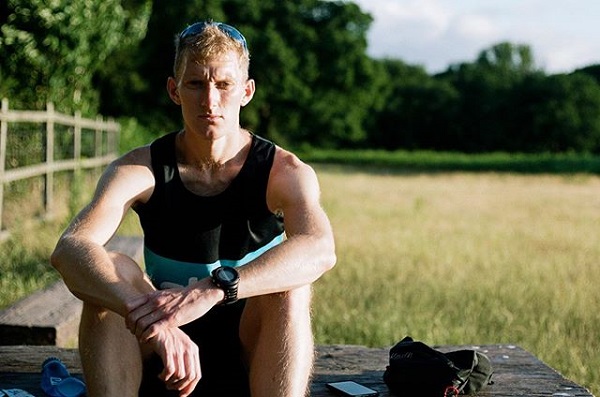 The clock is ticking for James 'Curly' Williams (pictured) who starts his quest for the Lands End to John O'Groats record on Saturday 25th May. The current best is 9 days, 2 hours, 27 minutes by Andi Rivett but James plans to run around 100 miles a day to smash the record.

LEJOG, as the 'uphill' route is known, starts in Cornwall and finishes in Scotland, travelling south-west to north-east for almost 850 miles. Key places on the route, or nearby, include Bodmin, Tiverton, Chepstow, Hereford, Warrington, Kendal, Penrith, Lockerbie, Edinburgh, Perth, Aviemore and Inverness.

So who is this man of steel who is so confident he can take the record below nine days? He is actually an Ironman and has been competing in running and triathlon for more than 10 years, with four Ironman finishes to his credit. Without the 2.4-mile swim and 112-mile bike warm up, his best straight marathon is 2:30:05 in the Virgin London Marathon 2017.

A competitive club athlete with Belgrave Harriers, James completed the Marathon des Sables and won the 2018 Centurion Running Autumn 100 mile ultra in 15hrs, 18mins, 42secs. But James runs fast as well as far, as his parkrun best is 16:00 at Fulham Palace and he has a 33:24 PB for 10K set at Hyde Park in 2016.

The Saucony sponsored athlete is behind the aptly named James Runs Far website and blog, where mere mortals like us can mine a wealth of running tips and gain inspiration from the expert. James also shares his training and we know he has been cramming up to 1,200kms (760 miles) a month during his peak preparation phase.

During the LEJOG record attempt, James plans to spend around 18 hours a day running up to 100 miles, sleeping just 4 hours at night! His progress can be followed live from 25 May via Open Tracking here

Of course, this massive undertaking is about far more than breaking a record. James is also hoping to raise awareness and £10,000 for Hope for Children charity and you can make a donation on his Everyday Hero fundraising page here

All at runABC online are in awe and wish James every success in his mammoth undertaking.