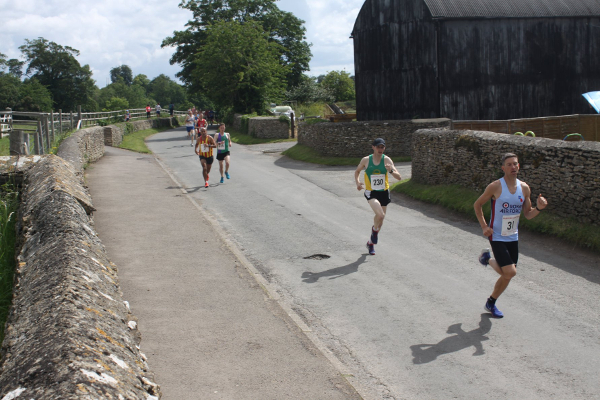 James Bellway and Shona Crombie-Hicks had plenty to celebrate at Sunday’s (9 June) Fairford 10K. For James there was the added bonus of a new course record.

Fairford 10K and 3K Fun Run was organised by Running Somewhere Else: it was part of the Fairford Festival (7-9 June), an annual event that had its 25th birthday this year and commemorated the first moon landing 50 years ago.

Around 350 runners headed off at 10.30am to follow a one lap course on quiet country roads around this Gloucestershire village. The route featured scenic views of the Cotswolds and was undulating to hilly: the first half was all uphill before levelling off then downhill for the second half and well supported by the local population.

The prize list included top three men and women, age category winners and a male and female team award. There was also a prize for the first male and female Fairford residents and every finisher received a medal and goody bag.

It was another winning run for Shona Crombie-Hicks of Tewkesbury RC, coming on the back of her victory at the Broadway Hill Charity Run (To The Tower) only a few days beforehand. She was the first female in 38:54 followed by Wendy Nicholls of Cirencester AC in 41:54. Niamh Shoemark of Bourton RR came third in 43:14.

Bellway and Crombie-Hicks were over the moon with their wins.