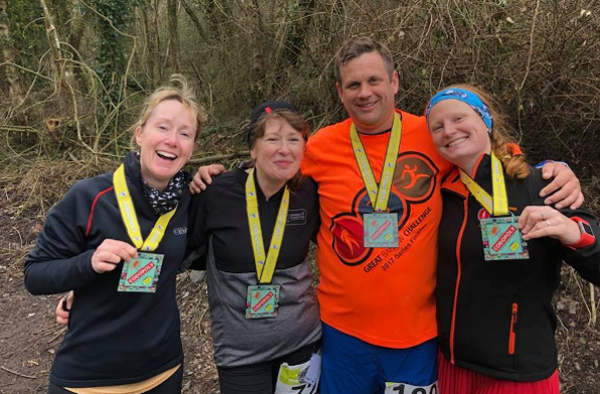 Go Running And Collect At Codopoly

Runners got on board at the CODopoly Triple, a three-day event from Monday (19 March) to Wednesday (21 March) in Shropshire. The choice of three distances and the monopoly-themed medal meant there was everything to play for.

There was a sense of community amongst the entrants as they gathered for this unique midweek challenge, organised by Denzil Martin of How Hard Can It Be Events & CODRC. They opted to run one, two or all three days and a 10K, Half Marathon or Marathon or a mix of all three in either Lightmoor or Coalport.

The races were held on challenging courses in weather conditions that improved as the days went by. The Lightmoor route involved multiple laps of Burroughs Bank whereas over in Coalport, they followed a disused railway line alongside the River Severn between Ironbridge and Bridgnorth.

The majority of people opted for the marathon distance followed by the half and then the 10K. A few runners completed 9 miles and 19 miles.

On day two, 65-year old Steve Bassam completed his 99th marathon at Coalport in 5:37:20. The Middleton Harriers man will be running his 100th marathon in Manchester on Sunday 8 April alongside other members of his club. Steve was diagnosed with rheumatoid arthritis nearly 15 years ago and after several operations, took up running to regain his fitness and has never looked back since then.

No runner was sent to jail; instead they collected a memorable piece of ‘bling’ and goody bag.

Photo courtesy of How Hard Can It Be Events And CODRC.