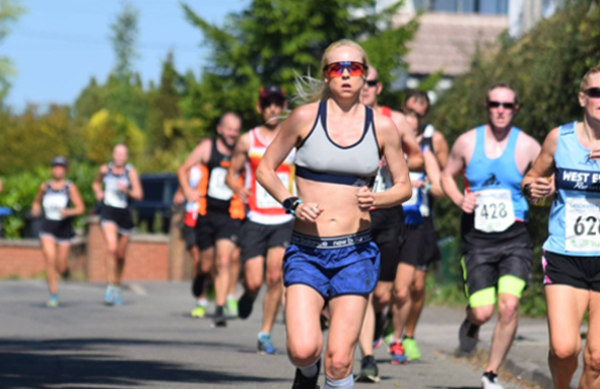 There was a surprise for runners at Sunday’s (2 September) 20th anniversary John Fraser 10. They were joined by elite athlete Gemma Steel at this sold out event in the East Midlands.

A champion on road and cross country, the New Balance sponsored athlete was spotted by entrants taking part in the John Fraser 10 (JF10). Gemma is no stranger to this race having won the women’s title in 2008 and again in 2009 while setting a new course record of 58:03. She didn’t enter this year’s event; instead she presented the trophies and prizes to the 1st, 2nd and 3rd man and woman, age category winners and top three teams (men and women).

400 runners set off at 10.30am from Countesthorpe Community College in Leicester and followed a hilly, anti-clockwise route through villages and countryside. This was the last summer race in the Leicestershire Road Running League (LRRL) series and on a day when temperatures reached 26 degrees, making it even tougher than usual.

Simon Birch of Hinckley RC won the anniversary special JF10 in 55:01. Paul Featherstone of Hermitage Harriers was second in 56:21 followed by Tom Whitmore of Charnwood AC in 57:46.

Gemma Steel’s next race is the Simplyhealth Great North Run on Sunday 9 September where she will be part of a fiercely competitive Elite Women’s field.