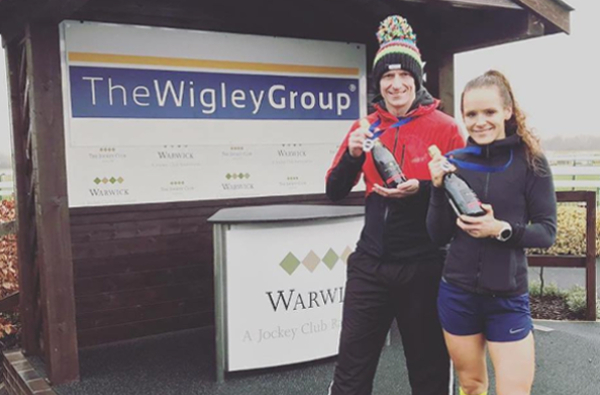 Gary & Natalie first past the post at Warwick Half

Gary Priestley and Natalie Bhangal were in prize-winning form at Sunday’s (3 March) Warwick Half Marathon where they defied the rain to claim the men’s and women’s crown.

Over 900 runners entered The Wigley Group Warwick Half Marathon, held on a traffic-free course through the historic town. While weather conditions were cold and wet, the atmosphere was warm and generous as the race was fundraising for the British Heart Foundation (BHF). Many were running for the BHF, the Rotary Club or the Sea Scouts or their own personal charity, all of which stood to benefit on a large scale thanks to their efforts.

The field set off at 9am from Warwick Racecourse to follow an undulating route flanked by crowds and volunteers who supported them every step of the way. This and the patience of local residents were much appreciated by the runners and the organisers.

International mountain runner Gary Priestley is known for his off-road achievements; but the Salford Harrier was equally impressive on the road, crossing the line in 1:12:17. He finished over three minutes in front of Ian Allen of Spa Striders, second in 1:15:36. Allen’s teammate Chris McKeown closely followed him to take third place in 1:15:40.

Natalie Bhangal followed up wins at the Draycote Water Winter 10K Series with a spring victory at Warwick. The Leamington C & AC member raced across the finish line in 1:27:20, over a minute ahead of her teammate Sue Harrison who came second in 1:28:34. Becki Timmings of Bromsgrove & Redditch AC was third in 1:29:30.

There was a medal for every finisher with all proceeds going to charity.