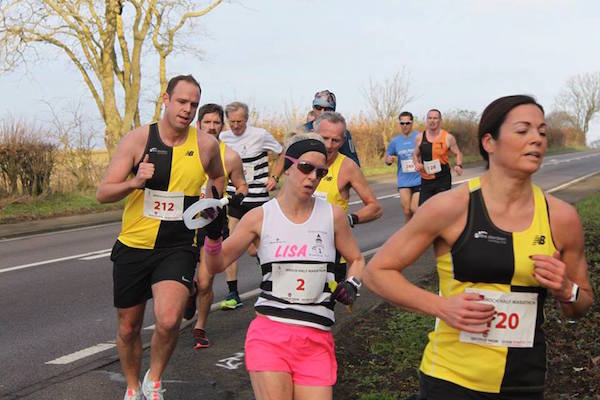 Bonny Day in the Broch

Beautiful conditions greeted runners at this year’s Fraserburgh Half Marathon, one of the last big events of the year in the North-East.

Superbly organised by Fraserburgh Running Club, the event features an unfeasibly generous post-race buffet which more than makes up for any of the potential downsides of running near the North Sea in the middle of November. Add to the mountain of homebakes, a friendly and welcoming atmosphere and great support from the marshalling team, and it’s no surprise the event’s 300 places sell out well before race day every year.

As it happens, conditions were perfect for yesterday’s race, which followed the usual route into the Buchan countryside – essentially out from the James Ramsey Park pavilion and back.

Metro Aberdeen made a strong showing in the results, with Jason Kelly taking top honours in a time of 1.13.38. Nearly three minutes separated him and second place Tom Roche (Insch Trail Running Club), whose time of 1.16.19 was a performance nearly one minute faster – and one podium place better – than last year’s. Roche himself had a just under a minute on third placed Callum Crawford, Kelly’s Metro teammate (1.17.16).

Metro’s dominance continued in the women’s race, with last year’s winner Claire Bruce again claiming the women’s prize, in a time of 1.23.49. She was nearly five minutes ahead of Lisa Allan, from the host club Fraserburgh (1.28.36). Taking the same prize home again was Bruce’s Metro clubmate, third-placed Hazel Wyness (1.29.42), continuing in the good form she has shown all year by knocking nearly a minute off her 2017 time.