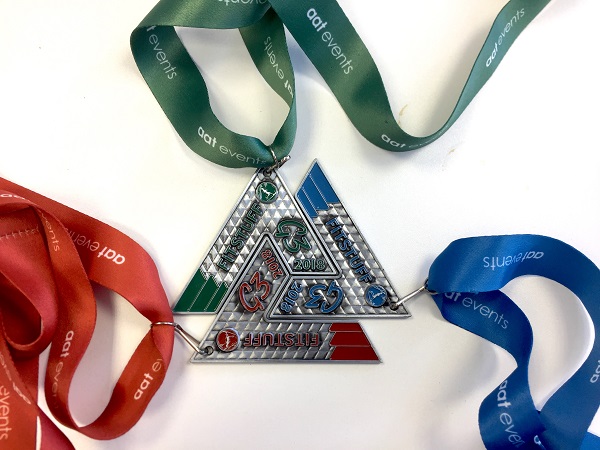 The Fitstuff G3 Trail Series is set in the Surrey Hills Area of Outstanding Natural Beauty close to Guildford. Just over 300 runners were evenly split between the 10k and 15k options as the 14th annual series concluded with a third sold out event on Saturday (3 February).

This year's aat-events races took place on 6 January, 20 January and 3 February 2018. Based on the locally named ‘Three Peaks’ of Guildford, these attractive races are without doubt Guildford’s most popular trail runs.

The G3 series comprises three off-road races between 5k to 15k from Newlands Corner, a picnic site and beauty spot high on a ridge of the Albury Downs. The routes are notoriously tough but all participants are rewarded with home made brownies and unique, interlocking medals (pictured) to encourage participation in all three races.

There were 313 finishers at the final race of the 2018 series, which featured some of the toughest routes yet. Both 10k and 15k courses offered spectacular views across Green Belt countryside, weaving across fields and through woodlands.

The runs featured a little used trail curiously named 'St Martha’s Back Passage', a narrow and sharp climb to St Martha’s Church, which is at 574 feet above sea level and only accessible by foot! The runners enjoyed a fantastic, panoramic view of up to eight counties from the church while they got their breath back.

Pete Marsden (Pitiful in Pink, 1:32:51), who finished 80th in the 15k, gave runABC South his view of the Fitstuff G3 Series: “A brilliant event, well organised but informal, friendly and chilled. A tough, muddy, hilly route through the stunning Surrey Hills and North Downs, finishing with a delicious brownie and an enormous sense of well-being, and all done by 9.30 on a Saturday morning. Just the job.”