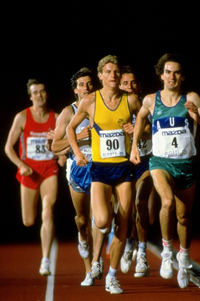 A Commonwealth Of Talent

I have always been a huge fan of the Commonwealth Games (writes Chris Broadbent). The latest edition is currently taking place on the Gold Coast, Australia and while it does not have the same global prestige as the Olympic Games, it often offers the first glimpses on the international stage of the planet’s greatest runners. Here’s five who went on to be true greats after first breaking through at the Commonwealths.

Liz McColgan
Unknown at international level the 22-year-old got the home crowd roaring when she took gold in Edinburgh in 1986 over 10,000m. She defended the title four years later, one of many highlights that saw her win World gold, Olympic silver and the London and New York Marathons.

Kip Keino
The trailblazer for the ongoing domination of Kenyan distance running. He was a double gold medalist at the 1966 Games in Kingston before going on to win Olympic gold in 1968 and 1972. He is the forefather of Kenyan success since.

Christine Ohuruogu
A talented former netball player, she launched her gold medal winning career in Melbourne in 2006 over 400m before going on to win Olympic and World gold and becoming one of Team GB’s most decorated athletes ever.

Rob de Castella
One of marathon running’s cult heroes. His first major title came on home turf at the 1982 Brisbane Commonwealth Games. He won the World Championships one year later and defended his Commonwealth title in Edinburgh.

Enjoy the 2018 coverage of the Commonwealth Games and look out for those stars of the future!