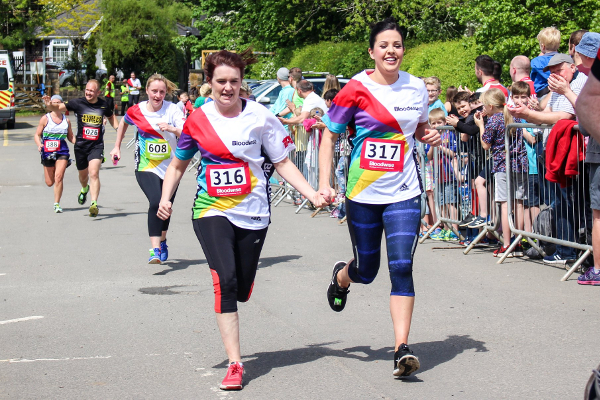 Over 400 runners battled heat and hills at last Sunday’s (13 May) Bloodwise Bromsgrove 10K and 5K. They took part to make a difference and ultimately save lives.

Both races started at 11am at Bromsgrove Rugby Club with stalls, sports massages and a BBQ adding to the fun and enjoyment. Colourful and unique Bloodwise Tshirts were much in evidence as runners proudly wore them as proof of their fundraising efforts. The majority of the entrants were from the UK; however, the race sparked international interest with runners from Denmark and Germany toeing the line.

Johnny Cullen won the men's race in 34:25 followed by Tom Bristowe in 35:32. Ashley Ross was third in 35:48. Strong performances on an undulating course.

Lindsay Browning was the fastest female in 40:34 with Natasha Tandy second in 46:29 and Stephanie Jones in third in 48:05.

This 10K and 5K was organised by a group of volunteers from Bloodwise Bromsgrove & District Branch who help fund ground-breaking research into all types of blood cancer of which there are 137. This is the fifth most common cancer in the UK.

Bloodwise Bromsgrove launched in 1988 and since then has raised over £1,000,000 which has paid for vital equipment and other similar resources for local hospitals. This event, a Forget Me Not Walk and Country Walk have made a significant contribution to this impressive total. The group also arrange quiz nights and in-store collections.

The organisers wish to thank all the runners for their hard work and selflessness as nearly £14,000 has been raised for Bloodwise Bromsgrove. This includes £90 from a mouth-watering cake raffle.