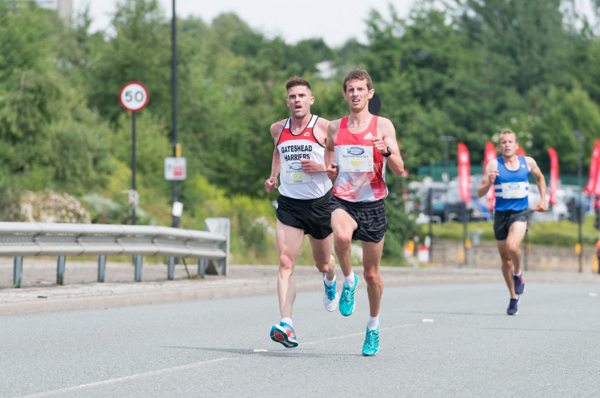 The Blaydon Race once again reinforced its status as one of the most popular club events in the north of England with over 4300 runners taking part. There was drama at the last, too, with Gateshead’s Chris Parr, who had led for the majority of the race, falling two places at the final stretch in an enthralling finale.

Staged on the same date every year since 1961, the start of Saturday’s race was heralded with a customary recital of the 1862 Blaydon Races song, which opens with 'Aa went to Blaydon Races t'was on the ninth of June'.

Competitors set off from Balmbras in Newcastle, down Collingwood Street and along the Scotswood Road past Armstrong’s factory, ending at Shibdon Road playing fields in Blaydon.

It was at this point at which the action started to really unfold as Parr, who seemed on course for victory with a superb performance, was overtaken by John Beattie (26:39) and Carl Avery (26:42), with the Gateshead Harrier finishing a further four seconds behind.

Beattie, of Newham & Essex Beatles, later commented on the fight to the finish: “Came back from Newcastle with this today. Had to scrap right to the line but delighted to win the #BlaydonRace. Brilliant event, loved racing & will definitely be back next year.”

It was more clear-cut in the women’s competition as Wallsend Harriers’ Danielle Hodgkinson (30:47) finished well ahead of Stockport’s Elle Baker (31:33) for a convincing victory. Morpeth’s Jane Hodgson claimed third place (32:09).

Unfortunately, there were reports of a runner suffering from a suspected cardiac arrest during the race. Event officials have been applauded for their response, with a paramedic quickly on the scene to successfully resuscitate the runner, who was then taken to Freeman Hospital.