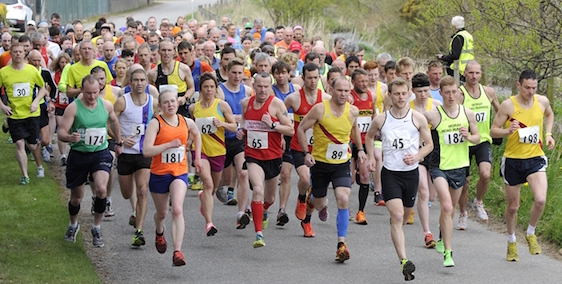 Entries close at midnight tonight (Wednesday, 8 May) for the fast and flat Benromach 10K (Sunday, 12 May). The results of the race, organised by the Forres Harriers, will also decide the winner of the popular Northern Scot 10k series.

Just over 50 runners have taken part in the three other races in the series – Nairn 10K, Buckie 10K and Moray RR 10K at Miltonduff – making them eligible to win the top prize if they also compete at Benromach.

Inverness Harrier Gordon Lennox currently leads the men’s series with a cumulative time of 1.40.51, but his rivals are not far behind. Max Abernethy (Fraserburgh RC, 1.40.51) is only just over a minute up on Lennox, with veteran Eoin Coull (Ross County AC, 1.42.01) also still in with a chance.

Lennox’ Inverness clubmate Caroline Marwick leads the women’s race with her cumulative time of 2.00.28. Also in the running are Moray’s Michelle Slater (2.04.22) and Justine Blaszk (2.18.15).

The race route starts and finishes at the Benromach Distillery, with registration held at Forres Town Hall.

Online entries can be made via Entry Central. There will be no entries taken on the day.