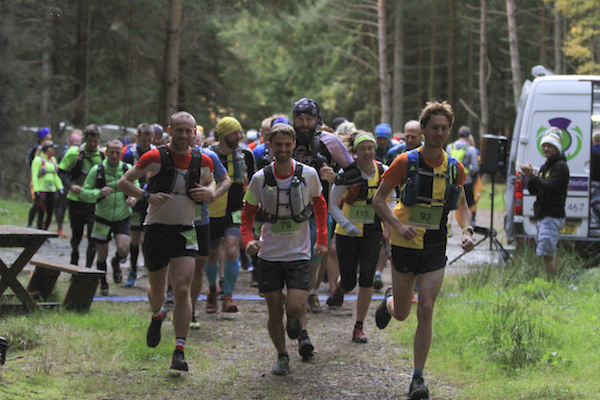 All smiles at new North-East Ultra

Less than a fortnight after hosting the 30th anniversary Bennachie Hill Race, the slopes of the North-East’s most famous landmark welcomed a brand new event on Saturday (12 October).

The result of many years of planning by local runner Andrew Gordon, the ingenious 50k (31 mile) route of the Bennachie Hill Ultra Marathon linked the iconic peaks of the range, including Millstone Hill, Hermit Seat, Oxen Craig, Little Oxen Craig, Craigshannoch and Mither Tap – without ever using the same trail twice.

The new addition to Scotland’s ultra running calendar, which clocks in at over 5000ft of elevation, sold out within a day of its launch in May.

RunABC Scotland online’s Christine caught up with organiser Andrew Gordon after the race. “It was just fantastic. Everyone really enjoyed themselves, and the feedback we’ve had from the runners has been really positive. We’ve had lots of comments about how beautiful the course, and the trails, were. All the runners made the four-hour cut off at 18 miles, and we had nearly 80 finishers.”

Gordon was very grateful for the support of all the volunteers, marshalls and members of other local clubs who helped make the event happen. “Having the Bennachie Centre as HQ was fantastic, too. Jen and her colleagues were brilliant. We couldn't have asked for more.”

Any surplus funds from the event will be split between the Bennachie Trust and COTAG, who provided medical and safety support on Saturday.

When asked if he would change anything about his carefully designed route for next year, he replied: “Other than adding in another bag drop, I don’t think so. It worked really well. Runners said they liked the varied nature of the course, and it worked logically too, even though some have said that in places the route was psychologically tough – thinking you’re heading back when you’re not!”

Even the race winner, GB international trail runner Kyle Greig (Metro Aberdeen), found the course challenging, Gordon noted. “Kyle said he loved it, though it certainly was tough. But that shouldn’t put people off. Quite a few folk were doing it as their first ultra, including the second-placed runner, Edward Payne. It’s tough, but certainly achievable”

Asked about his plans for next year, Gordon said that he was determined to increase numbers and expand the event. He said: “We deliberately kept entries at 120 to see how it worked this year. But next year, I’d love to see the event grow, and also help the local economy by attracting more runners from outside the area. We had a few runners from Edinburgh this year, which was fantastic. But I think we’ll see more as word spreads!”