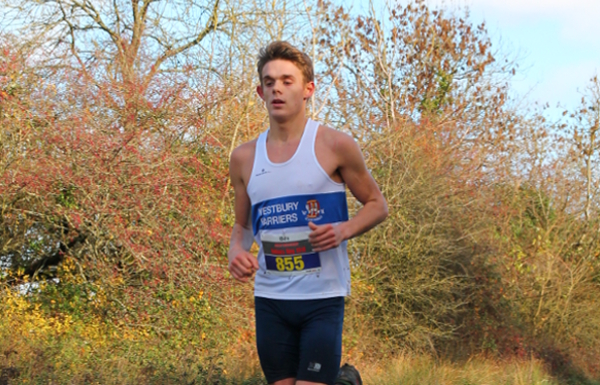 A hard morning’s work from Ben Rawlins resulted in victory at the tough Sodbury Slog (11 November), organised by Bitton Road Runners. The U20 triathlete was amongst 1000 runners who faced mud and hills in South Gloucestershire.

The Sodbury Slog is a ‘must do’ race for any runner and demand for places is high with this year’s event selling out in 95 minutes. It has used the same 10-mile route since its debut in 1990 - a mixture of paths, fields and ditches so lots of mud, hill climbs and assorted obstacles plus a sheep dip and a pig trough!

Organisers made a couple of changes this year. They removed a section of tarmac, replaced it with a scenic part of the Cotswold Way and added a new feature called ‘The Leap of Faith’.

The race is always held on Remembrance Sunday and the commemoration began with the Exhortation, two minute silence and a bugler sounding the Last Post. Runners had warmed up courtesy of Terry the Tornado and his energetic routine before heading off at 11.05am.

Ben Rawlins of Yate TriStar and Westbury Harriers won the men's race in 1:03:38. James Donald of Team Bath Athletics Club was second in 1:04:00 and Paul O’Mara of Tyne Bridge Harriers third in 1:04:08.

Annabel Granger of Bristol and West AC was the fastest female in 1:12:39 followed by Sophie Voller of Westbury Harriers in 1:15:09. Fiona Blackmore of the host club Bitton Road Runners was third in 1:15:19.

This race fundraises for worthy causes with around £8,000 donated after expenses have been paid and a further £7,000+ from sponsored runners. A total of at least £15,000 donated to charity.