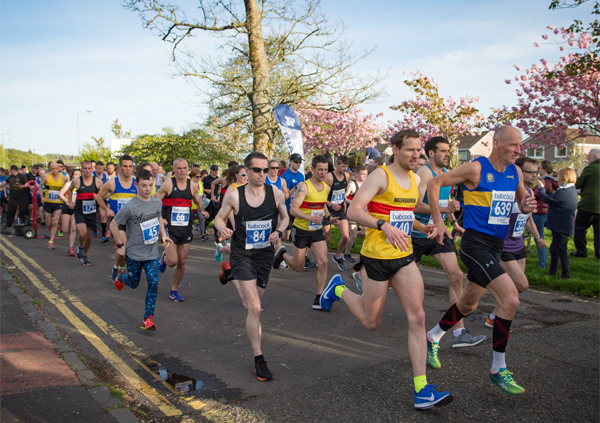 Babcock, the highly-skilled engineering services company, will continue its support of the eponymous ‘Babcock 10k Race Series’ for a third year in 2019.

Nearly 1900 runners entered the three-race series earlier this year, a more than 50% increase in numbers in the first year in 2017.


Entries are now open at Entry Central and until 31 December there is a special ‘early bird’ discount, reducing the three-race series entry from £43.00 for affiliated club runners to £33.00 and the £49.00 rate for unaffiliated runners to £39.00.

Every series entrant will receive an exclusively designed commemorative technical T-shirt from More Mile and every finisher in each race will receive a unique commemorative medal, making up a set of three. Sponsors Start Fitness and More Mile will also supply goody bags containing different running accessories at each race.

Start Fitness and More Mile will be providing more than £3,000 in vouchers for individuals, teams and age group winners while the leading athletes will compete for more than £2,000 in cash prizes. The winner in each race will receive £125 with time bonuses for course and series records.

AG Barr will provide over 6,000 bottles of water across the series to keep runners refreshed and hydrated.

It is expected that Katie White of Garscube Harriers will defend her series and three individual race titles from 2018 following her recent 2 hours 40 mins personal best at Frankfurt Marathon. Last year she set new records in both Helensburgh and Dumbarton.

Helensburgh winner, Craig Ruddy from Inverclyde, Stephen Trainer from Greenock Glen Park who won in Dumbarton and Calum McKenzie the winner on Glasgow Green are all expected to line up again next year to defend their titles.

The series records remain 34.25 set by Fionnuala Ross of Shettleston on Glasgow Green in 2017 and Olympian Wayney Ghebresilassie her clubmate who ran 30.11 in the same year at the same event. Ross recently won the famous Abbey Dash 10K in Leeds in front of 10,000 runners.

The series this year takes on a particularly important dimension with the celebration of Dumbarton Athletic Club’s centenary. There will be special incentives and rewards for runners in that race, to be announced shortly.

Gavin Leckie, Managing Director of Babcock at HMNB Clyde said: “We are delighted to support the Babcock 10K Race Series for a third year. This is an excellent series of races which play an important role in promoting health and fitness within the local communities in which they are run. I’m personally very enthusiastic about getting involved and joining in with participants from across our teams in HMNB Clyde.”