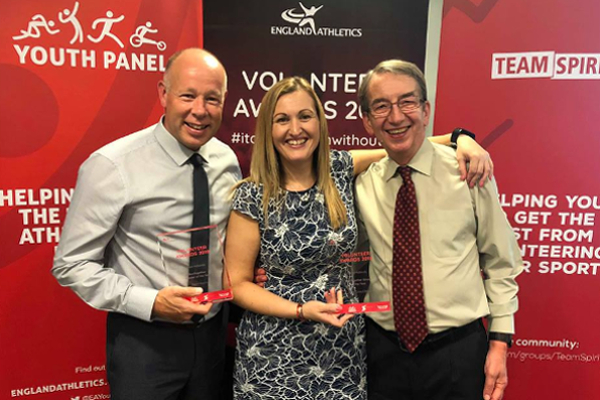 It was a night to remember for Crabbs Cross Chasers and their Run Leaders Doug Richards and Julie Swain at the 2018 Regional Volunteer Awards (Tuesday 25 September). Dylan Gould also had something to celebrate...

Crabbs Cross Chasers is a friendly, inclusive club based in Redditch and part of RunTogether, a national programme launched in January 2017 by England Athletics. This initiative was set up to encourage people to take up running as part of a local group to enjoy the social as well as physical benefits of the sport.

The Chasers were voted RunTogether Group of the Year in the West Midlands with everyone including the two leaders delighted by this accolade. The group organise two social runs on Mondays and Thursdays each week that are free to take part in along with a ‘charity bucket’ for anyone to donate to if they so wish. They choose three to four different charities to support each year and as it stands, the bucket has reached £1,000.

Dylan Gould is a stalwart in the West Midlands running community. An event director at Arrow Valley parkrun and coach at Lickey End Striders are amongst his talents along with being a guide for visually impaired runners. His contributions were recognised at Tuesday evening’s ceremony where he was voted RunTogether Leader of the Year.