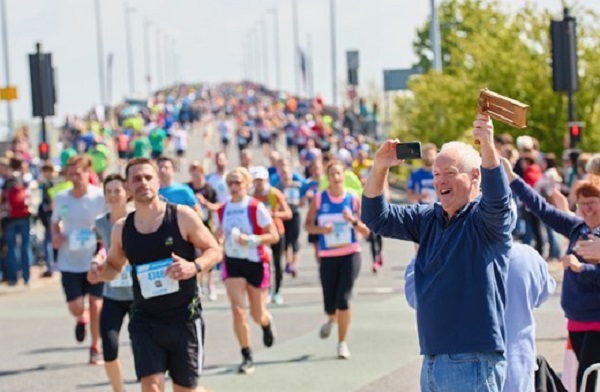 Southampton next stop on marathon tour

With the famous blue line removed, streets cleaned and London back to normal the attention of devotees of the test of endurance that is the marathon turns to the great seafaring city of Southampton for ABP Southampton Marathon on Sunday (5 May).

Last year's winner was the local favourite and former World Beer Mile contestant, Richard Waldron (Southampton AC, 2:40:46) who was a minute clear at halfway and won by more than three minutes. Ireland's Orla Tuohy (Grange-Fermoy AC, 2:58:54) was the sole female under three hours on this two-lap course of city, coast, parkland and three bridges, including the tough climb over Itchen Bridge. More than half the 1,070 finishers were inside 4:30:00.

Southampton is more than just a marathon, though, and the full programme includes hugely popular half marathon, 10K and fun run options. In 2018 there were around 8,000 runners in the three main events and their efforts were cheered by an estimated 30,000 spectators.

Famous landmarks such as Bargate, QE2 Anchor and St Mary's Stadium – home to the Premiership football team – feature on the course and the start and finish is above Bar Street, adjacent to Watt's Park. The impressive race village is held in historic Guildhall Square.

Like many race organisers, ABP Southampton Marathon are taking major steps to make their event more eco-friendly. The 2019 race will be the greenest yet, as runners will be provided with Drinq Smartpacks on the course and reusable bottles at the finish from water station partner, Utilita Energy.

All goody bags are made of recyclable paper; left over food will be donated to homeless charity and any spare finishers T-shirts will also be donated to charities. Even the lead car supplied by transport partners Hendy will be electric powered.

This year there is a special 'do the double' offer for entry into Southampton Half Marathon and Winchester Half Marathon (22 September) for £75. Check ABP Southampton Marathon website for entry details and look out for our race report online at runABC South next week.