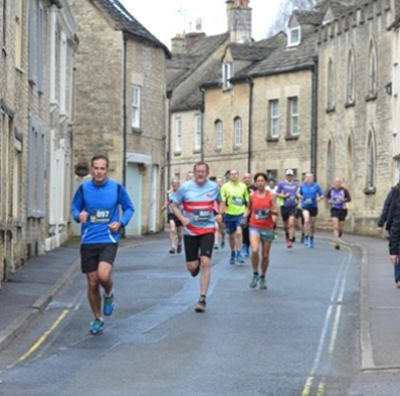 Over 400 runners celebrated 10 years of Minchinhampton 10K on Sunday (10 March) with was a pre-Easter treat at the finish...

The ancient market town of Minchinhampton in the delightful Cotswolds was the location for this 10k that launched in 2009. This year was its 10th birthday and there was a good turnout at this friendly, welcoming race from iamoutdoors that together with the Mini Minch for youngsters is popular with families as well as individuals. This spring event is part of the Cotswold village double along with the Bisley 5K & 10K.

Cold and windy conditions formed a backdrop as runners waited to start at 10am from Minchinhampton Primary School. They followed an undulating course on quiet country lanes that included a steep hill at 6k and a final section up the main street to the finish. The Mini Minch was a two-lap 2k race held on the Common with obstacles to climb over.

A bullish display of running from Neil Kennedy of Bristol & West AC saw him win the landmark race in 36:13. Nick Williams of Thornbury RC was second in 37:13 with Chris Brown of Severn AC third in 37:58.

The weather didn’t bother Katy Roy of Chepstow Harriers who was the fastest female in 42:30. Stephanie Moody was second in 44:06 followed by Liz Halliwell of Cotswold Allrunners in 45:37.

There were 408 finishers. All received a technical t-shirt, a bull-themed medal and to get them in the mood for Easter, a Cadbury’s Creme Egg.