Run like a Kenyan, Coach Colin shows you the way 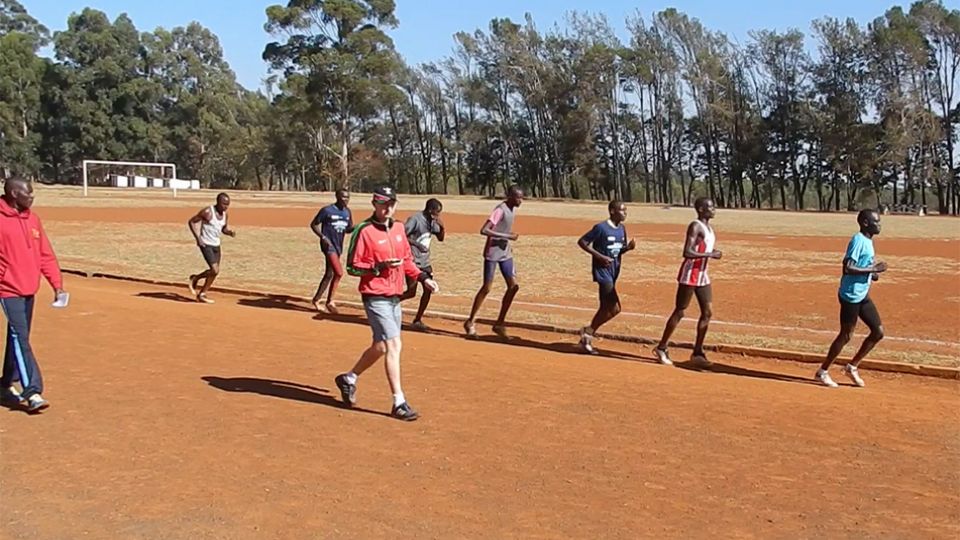 'The basics of Kenyan training' is from Colin Thomas's recently published Running on the Red Dust. We love Colin's colourful perspectives on the commitment of Kenyan runners...

The first observation that anyone would make is the sheer volume of runners pounding the red dust roads and tracks. Groups of a handful of runners are commonplace, although you will also see larger groups of 20-40 runners, even up to around 100-strong. On some days, some groups will start to gather before sunrise. They may start their run from town or travel to another location to start.

Sunrise in Kenya is at around 6.10am and is often the best part of the day. It’s a popular time to run due to the reduced volume of traffic on the dusty roads. It’s also around 12-14 degrees Celsius, so a nice temperature to run in. The Kenyans find it quite cold at this time but for me it was perfect!

Then from 6.30am, 7am, 7.30am . . . . . . . . . up to 9am, groups of runners gather on street corners, start their run, cruise past in the middle of their run or even finish their run. You can tell if the groups have finished their run because they will be standing around doing some static stretching and chatting to each other.

I always like to make an intelligent 'guestimation' as to what session or run they have done based on the amount of red dust stuck to the runner. The harder and faster somebody runs, the more dust is thrown up into the air. It is also thrown higher into the air. The more the runner sweats, the easier it is for this dust to stick to the runner. So, dust below the knee only indicates it was most probably an easy run. Whereas dust on the head and face, especially on the teeth (yes, the teeth!) would signify a higher intensity, faster session. Breathing heavily, with all the dust flying around at high levels, causes the inhaled dust to stick to the runner’s teeth; so red teeth equals a hard run!

Any run between 6am and 9am is most likely the first run of the day. Some runners do a second run at around 10am. Or some groups could just be heading out for their first session at 10am, especially if it is a track session. The running tracks tend to be at their busiest at around 10am.

These morning runs can be anything from an easy run, a long run (which is nearly always hard), a fartlek session, intervals or hills. The Kenyan highlands are very hilly by nature, so it can make for a tough session wherever you choose to run. These morning runs and sessions are typically 60 minutes or more.

The evening run takes place at around 5pm and is always easy. Groups of runners gather for a more sociable light jog at an enjoyable pace which would be termed a recovery run. That is unless you are deep in the realms of a Renato Canova marathon plan with a special block including double sessions. The evening runs can be anything from 30 to 60 minutes. They help to top up the weekly total volume, which will be anything between 70 and 140 miles.

There are normally only a couple of hard sessions per week, maybe a maximum of three on some weeks. A hard long run would tend to dominate the training plan for the marathoners, with the other session being something faster like a fartlek or track session.

The rest of the week is filled with easy runs on the hilly tracks or through the forests. All of Kenya’s running towns are at high altitude where there is approximately 20% less oxygen in the air than at sea level. Of course, when you run, your breathing rate increases as the muscles demand more oxygen; your heart and lungs are tasked with delivering oxygen to your working muscles. So, your heart rate increases quickly with your increased respiration rate as you gasp for air.

Something else happens within your blood, at a slower, less noticeable rate. Oxygen is carried around the bloodstream by red blood cells, so the body adapts by producing more red blood cells to do this job. For most people, this can take around seven to ten days but varies a lot depending on the individual. As this adaptation takes place, running at altitude starts to become less hard.

However, doing a training session at this level is always more challenging on the body than the same session at sea level. This is perhaps one of many reasons why Kenyan athletes run so strongly in sea level races. Training at altitude is their norm. The caveat is that it is also more difficult to recover from a hard training session, and recovery is just as important as training.

Time in the late morning or early afternoon is often used for the highest quality rest or sleep. Sleep is an imperative part of recovery which is equally the most important part of any training plan. Without recovery, we do not improve physically. In a state of deep sleep, the body naturally produces human growth hormone (HGH) which restores muscle tissue and increases red blood cells amongst other useful properties. Essentially it recharges the body’s batteries. An extra hour’s rest during the day can really aid this process and help the runner feel better the next day. However, nothing can replace an early night and a good sleep.

Training frequently and consistently will produce rewards. Try to be patient and don’t do too much too soon when returning from an injury, a holiday or some time away from the sport. Follow a progressive training plan with small forward steps to success. As a general rule of thumb, the '10% rule' works fairly well: whether you are new to running, returning from an injury, or just looking to increase your mileage, do not increase the volume by more than 10% from week to week.

If you are increasing your volume, keep all other variables the same. So don’t try to increase your weekly distance and improve your speed in the same week. Remember, the more you train, the more you need to recover.

'Running on the Red Dust' in both hardback and Kindle versions is available on Amazon.

Find out more about Colin Thomas and the services he provides at the Marathon Guy website.