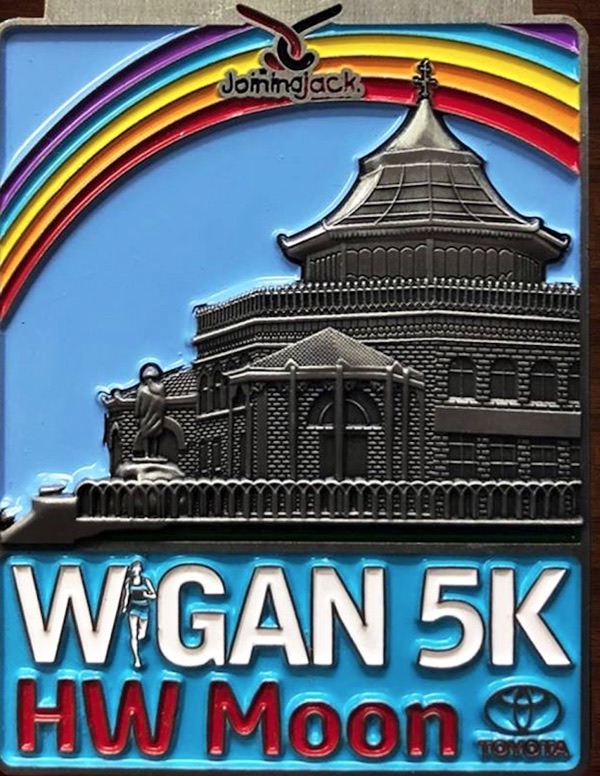 A few days after reporting of BTR Liverpool’s innovative idea of offering an additional PB medal for anyone hitting top form at their half marathon and 10 mile races this March, another event has caught our eye with their creative and colourful bling.

Runners at this year’s Run Wigan 5K, scheduled for Sunday 18 March, will receive the first ever colour medal from oganising charity Joining Jack. As the picture shows, the medal is brought to life by the rainbow, with the Joining Jack crest at the top.

The 5k race is part of the Run Wigan Festival, launched for the first time last year to great success with 4,000 runners competing across the accompanying half marathon and family run events.

This was the first ever staging of the festival after Wigan-based charity, Joining Jack, made the decision to extend the event on the back of the success of the popular Wigan 10K.

Like the 5k event, some fantastic medals are on offer for those competing over 13.1 miles – images of these are available to view on Run Wigan Festival’s Facebook page.

As the 2018 festival approaches, entries are being snapped up quickly (around 250 of 1500 remain for the Run Wigan 5K), so any interested runners are being encouraged to register soon.