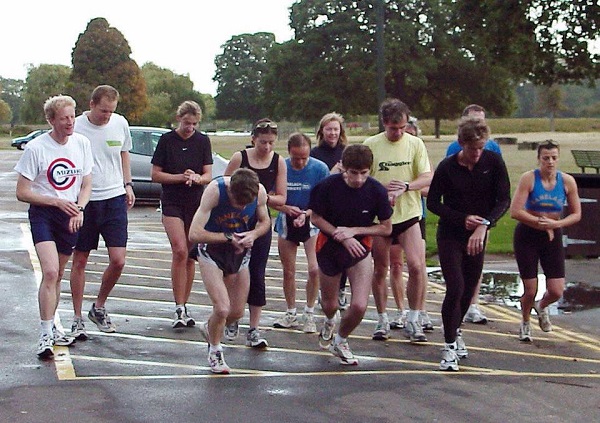 The 15th birthday milestone was celebrated at the original home of parkrun, Bushy Park, by 1,838 runners and 67 priceless volunteers on Saturday (5 October) – that's 1,825 more than the 13 parkrun pioneers pictured above!

The occasion was marked by the presence of parkrun founder, Paul Sinton-Hewitt CBE and special guest David Moorcroft OBE, former world 5000m record holder at 13:00.41 set at Bislett Games in Oslo in 1982. Moorcroft's time endured as the British record until it was broken by Mo Farah in 2010. David Moorcroft is the current Chair of parkrun UK and a huge parkrun enthusiast. His home parkrun is Coventry, as one would expect of the lifelong Coventry Godiva Harrier.

Things have certainly changed a bit since that inaugural 'Bushy Park time trial' over 5k. Yet the solid foundations of parkrun were laid way back in 2004 as the event was free to enter; held on Saturday morning in a park; organised by five volunteers; featured a run report; everyone was timed and the first finishers established course records. The first run witnessed a friendly dead heat between Chris Owens and Matt Morgan (18:47) and Rachel Rowan (21:01) was first female – just ahead of James Russell (21:37) who ran faster (21:03) to finish 192nd on Saturday!

First finishers in the 15th birthday run were Andrius Jaksevicius (Belgrave Harriers, 15:52) and Emma Davis (Ward Park Runners, 18:10) and the top age-graded performance was 85.71% by M55 Laurence Duffy (Stragglers, 18:33). Run director, Andy Wingate had told the participants to check their positions on the course after 13 minutes to get a feel of exactly how fast Moorcroft was in his pomp.

After the run the annual awards were presented by David Moorcroft. 'Volunteer of the Year' was Ian Riley and a 'Spirit of parkrun' trophy was presented to Bushy's famous supporter, Elisabeth Marris.

Read more about the history of parkrun here